Christina Schwab is a four-time Paralympian and two-time gold medalist at the 2004 Athens Paralympics and the 2008 Beijing Paralympics. She has enjoyed a stellar Paralympic career and as the veteran of the team she is focused on making the team once again and helping it get back on the podium in Rio.  She was voted U.S. delegation’s flag bearer at the closing ceremonies of the Parapan Am games in Toronto.

Personal background: Parents are Amy and Kevin Michels.  She has two brothers, Erik and Jay, and a sister, Jill.  She is married to CJ Schwab and they have a little boy named Lincoln.

NWBA: Who is your hero?
Christina: My mom.  I think she is just really strong.  She raised me as a single mom until she married my step-dad when I was 8.  She is my biggest fan and biggest supporter.  Since becoming a mom, I realize even more she made me who I am.  She was raising a child with a disability and she gave me the tools I needed to be successful. I can only hope I am half as good a mom to my son as she has been to me.

NWBA: When did you start playing wheelchair basketball?Christina: I was 11 years old. My step-dad took me to my first basketball practice.  I was a shy kid.  I didn’t want to go and without him I wouldn’t have done sports.

NWBA: What do you attribute your success to?
Chrisina: The support I’ve had.  Mike Frogley at Whitewater when I was a kid pushed me to be my best.  He was always pushing me forward.  He set a good example.  He was a hard worker.  My parents are hard workers. You don’t quit something in our family.  You do it until the end.  You never quit.  I was raised with a hard working attitude.

NWBA: Do you play any other sports?  Did you receive any awards from other sports?
Christina: I tried tennis and softball.  I tried track at a Junior outreach event at the University of Wisconsin Whitewater.  I tried every sport.  They had track chairs.  At the University of Illinois the coach saw potential so I pursued it for a time.
(Note: Christina accomplished the following during her track and field career: 2012 U.S. Paralympic Track & Field Trials – Bronze (800m); 2006 IPC World Championships – Bronze in 1500m; fifth in 400m: and seventh in 800m.

NWBA: What is your profession?
Christina: I am a para professional teacher’s assistant with the Denver Public Schools.  I work with children with mild to intermediate autism.

NWBA: What are your volunteer activities?:
Christina: I have been coaching the Junior Rolling Nuggets since 2008.  I play for both the Men’s Rolling Nuggets and the Denver Lady Nuggets, the team Jen Chew and I co-founded.

NWBA: Do you have any pre-game rituals or superstitions?
Christina: I used to listen to music. Now while the team is shooting around during warm up I do ball handling at half court for 5-7 minutes and check in with myself before joining the team for warm-up.

NWBA: Why do you play wheelchair basketball?
Christina: I love the game. It’s almost like home to me.  When I was doing track I was still coaching basketball.  It’s given me so much.  It has opened so many doors.  It’s almost always given back. I am the veteran on the team and now I can give back to the younger players.  Without it I wouldn’t have gone to a “big ten” university, had all the life experiences and met so many amazing people.  It’s a part of me.  Ten years ago my answer would be different. It’s who I am. It’s grown with me.  I have seen a different aspect of the game I would have never thought possible.

NWBA: What is your favorite basketball moment?
Christina:  Winning gold in 2004 at the Paralympics.  We broke the streak. We finally beat Canada in the semifinals on the world stage.  We had been trying to do that for 6 years.  Finally we were on top.  It was an amazing group of women.  Winning was the best feeling in the world.  In 2010 with Becca, they called the lineup “the Wisconsin Connection” because we played the same side and were dominant and are both from Wisconsin.  We got a world gold medal at the World Championships.  We had gotten three silver medals up until that point.

NWBA: Do you follow any sports?  If so, which are your favorite teams?
Christina: I am a huge Green Bay Packers fan and a Wisconsin Badgers fan.  I like college basketball because I feel it is a pure representation of the game vs. the NBA.

NWBA: Do you have any pets?
Christina: I have a dog named Maggie.

NWBA: What are your plans for the holidays?
Christina: I will be in Wisconsin for Christmas.  For New Year’s Eve we may visit the Denver Zoo Lights with Lincoln. It’s a family celebration now that we have a son.

NWBA: What is it like playing wheelchair basketball now that you are a mom?
Christina: I almost didn’t want to try out for Rio.  My father-in-law convinced me that it was ok.  He talked me back into it. He is pretty amazing and very sports-oriented.  He said when Lincoln is older he can say “My mom did this.” He said, “You’re still a good mom.  You’re not being selfish if you do this.” My husband CJ is also very sports-minded.  He coaches the prep team.  It’s a family affair.  Lincoln and I are at the gym while CJ coaches and have dinner there then he takes Lincoln home and gets him ready for bed while I coach.  CJ helps me a lot with Lincoln.  When I coach, I travel with the chair and work out with the kids.  I have to be more creative.  Lincoln requires a lot of my time.  After Rio I won’t be training as much.  I think it’s great that Steph (Stephanie Wheeler, Head Coach) has made it easier for moms to continue playing wheelchair basketball and there is more flexibility like they have done at U.S. Soccer.

NWBA: What is your short-term goal?
Christina: I want to make Rio in 2016.  I am training full time.  I want to get the team back on the podium.

NWBA: What are your long term goals?
Christina: I may have another baby.  This is my last hoorah but I will continue coaching the Juniors and I want to be the best mom I can be. 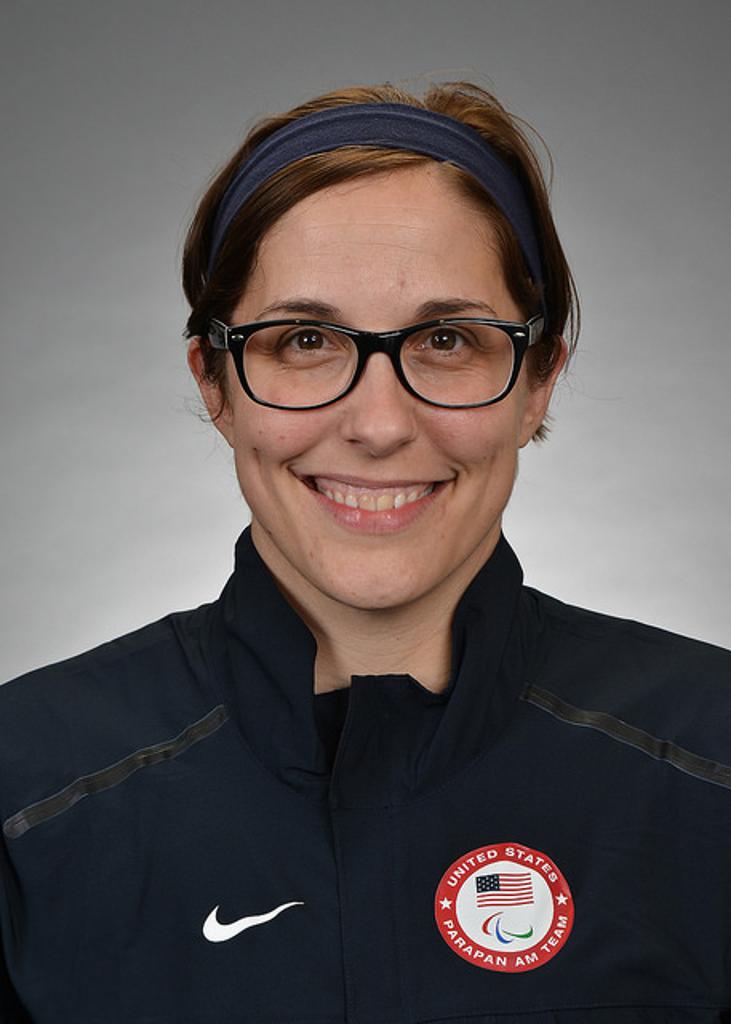