Birmingham, Ala. – Two-sport super star Christina Schwab of Dane, Wis., has made it through the cuts of the 2016 Rio Paralympic Games Selection Camp for Women’s Wheelchair Basketball, and if she makes the final roster later this year, will become a five-time U.S. Paralympian. Schwab has represented Team USA in wheelchair basketball in 2000, 2004 and 2008, and was in track and field in the 2012 Paralympics.

Schwab is focused on adding another Paralympic medal, after helping the U.S. women’s wheelchair basketball team to gold medals in 2004 and 2008. She also played on four Women’s World Championships from 1998-2010.

The three-day selection camp for the women’s wheelchair basketball team consisted of scrimmages and a variety of evaluation drills at the Lakeshore Foundation in Birmingham, Ala. The initial selection of 11 athletes is comprised of seven wheelchair basketball U.S. Paralympians, eight of the 12 returning from the 2014 World Championships, and 10 athletes from the gold-medal winning 2015 Parapan Am Games team.

“I think that one of the biggest things we looked at was the trust that the athletes have in one another and the chemistry they have developed over the years. This was certainly a factor in how they worked together,” said U.S. Women’s Wheelchair Basketball Head Coach Stephanie Wheeler of Champaign, Ill. “These characteristics are an important piece for us in moving forward and working towards Rio. It’s important for the athletes to have trust in one another for us to perform at our best.”

Two-time Paralympians Becca Murray of Germantown, Wis., and Natalie Schneider of Crete, Neb., will attempt to make their third consecutive Paralympic Games, after winning in 2008 and finishing fourth in 2012.

Five athletes are in position to make an appearance in their second Paralympic Games. Rose Hollermann of Elysian, Minn., Darlene Hunter of Commerce Township, Mich., Desiree Miller of Monroe, Wash., and Jennifer Poist of McSherrystown, Pa., are attempting to make their second U.S. Paralympic team in women’s wheelchair basketball. 2012 U.S. tennis Paralympian Mackenzie Soldan of Hemlock, Mich., is vying for her second Paralympics, however this time in wheelchair basketball. All five were members of the 2015 U.S. Parapan Am Games and 2014 U.S. Women’s World Championships teams.

A trio of upcoming elite athletes will attempt to make their first Paralympics. 2014 Women’s World Championships teammates Megan Blunk of Gig Harbor, Wash., and Gail Gaeng of Frederick, Md., will be joined by Abigail Dunkin of New Braunfels, Texas, in their quest for a trip to Rio de Janeiro, Sept. 7-18.

The athletes will participate in a variety of camps and friendly international competition leading up until the date of nomination to the 2016 U.S. Paralympic Team. The final selection of athletes, which may include up to 12 athletes, will be announced no later than July 26, which is in accord with the 2016 Rio Paralympic Games Selection Procedures for Women’s Wheelchair Basketball.

Joining Head Coach Wheeler on the sidelines will be assistant coach Trooper Johnson of San Lorenzo, Calif., and Kearstin Gehlhausen of Whitewater, Wis., serving as the team leader.

The National Wheelchair Basketball Association hosts the NWBA National Tournament each year where the top teams from each division come together to compete for their national title. The past few years the tournament has been hosted in Louisville, Ky., and will be hosted there again April 7-10, 2016. For more information, visit: www.nwba.org. 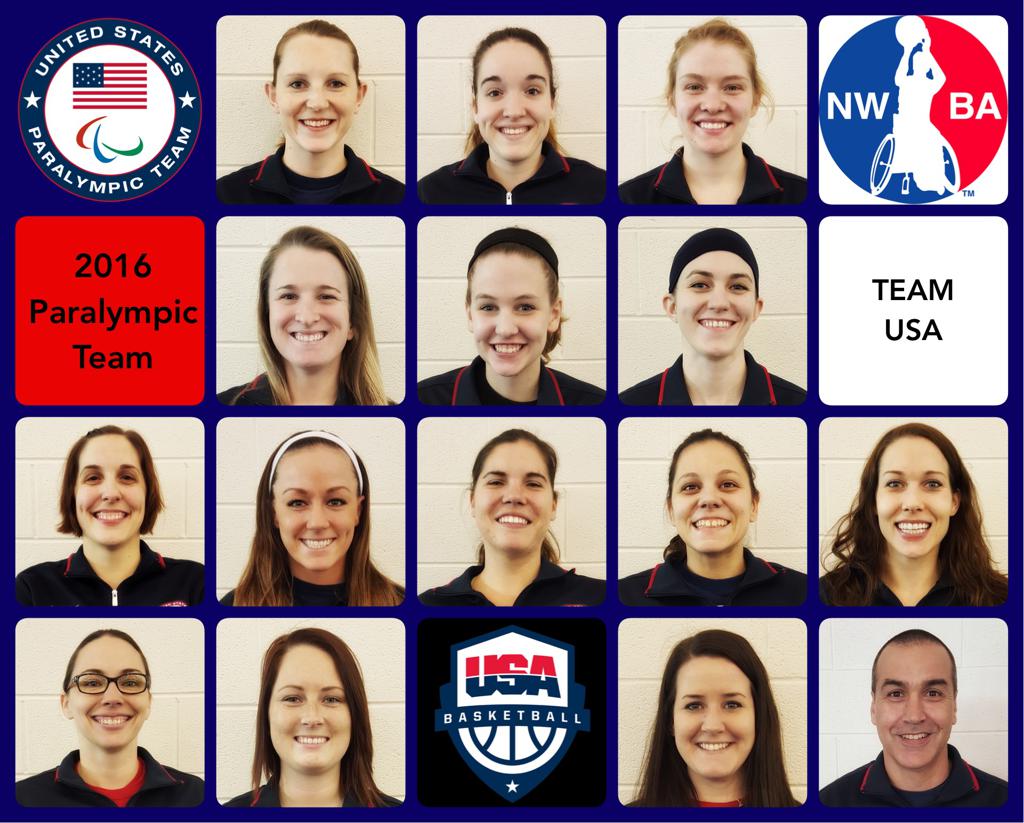