Wheelchair Basketball Star on Top of the World

Days that we look back on and consider blessings are usually fun, enjoyable days in which we realized opportunity, promise and change. Those type of days usually are not considered tragic, heartbreaking and life altering. For Jeff Glasbrenner of Golden, Colorado, his most blessed day back in 1980 was all of that. He was eight years old and was involved in a horrific farming accident that left him a below-the-knee amputee. One might think your whole world would come crashing down but, Glasbrenner was more than ready for what life had to offer his energetic spirit to the top of the world.

“When a big surprise comes along, you have two choices: 1. Accept the situation as it is; or 2. Take charge, and shape your own destiny,” said Glasbrenner. “That was one of my most blessed days.”

After the accident, nurses and doctors gave him limitations. They told him he would only be able to do certain things and his chances of a normal childhood from that point on would diminish. They told him again and again he would never be able to swim, run, or play any sports. Glasbrenner tried not to feel defeated but it in fact took him a long time to realize those limitations were just a disbelief and that he could do anything he set his mind to.

Fast forward just over 30 years and Glasbrenner has had more success then most athletes do in a lifetime. His latest feat would be the biggest goal he has ever set for himself, or any other person with a disability. He would be climbing to the highest point on earth, Mt. Everest with an apex of 29,035 feet, more than double the elevation of the United States’ famous Pikes Peak in Colorado.

“Most days, I feel like I am on top of the world….so, I truly want to be on top of the World,” Glasbrenner said on his website before embarking on his two-month journey.

He teamed up with Lincoln Financial, Astep Ahead Prosthetics and Paradox Sports. He and his crew made it to the top of Mt. Everest on May 18, 2016, after only eight days from starting at the base camp. The entire journey was right at two months. He trained six-eight hours a day almost daily in preparation.

“Surrounding yourself with the right people and organizations, you can accomplish any summit in life,” Glasbrenner noted about his support system.

It wasn’t an easy road leading up to to this climb but every aspect of his life and everything he has done has led to his biggest feat to date. He notes that his life truly turned around in college, when he attended the University of Wisconsin-Whitewater. Little did he know this was a powerhouse school for wheelchair basketball. When asked to play basketball he remarked he only had one leg, and then realized future teammate and roommate Troy Sachs meant for him to play wheelchair basketball.

He got involved with the sport and worked impeccably hard. University of Wisconsin at Whitewater Head Coach Fred Went saw his potential and encouraged him to try out for the national team. He worked extremely hard and was determined to reach his goals. In 2000, he made his first appearance at the Sydney Paralympic Games, where the team returned home with a bronze medal.

This only fed his hunger for more. In 2002 he won gold in the IWBF Gold Cup in Japan and made his second Paralympic Games appearance in Athens in 2004. Also in 2004 he made his name known by capturing the National Intercollegiate Wheelchair Basketball Championship scoring record – scoring 63 points and snagging 27 rebounds in one game.

He moved to Spain and began his international career. He played professionally for CD Ilunion in Madrid and then for Santa Lucia in Rome. In 2006 he propelled Team USA to the silver medal at the IWBF World Championships in Amsterdam. In 2008 the men’s wheelchair basketball team won gold at the North America Cup and finished seventh at the Beijing Paralympic Games.

When one sport ends you pick up another correct? He took up triathlons, rock climbing and mountain climbing. He became passionate about climbing, ultimately leading to his Everest quest. He climbed Aconcagua in the Andes along with Cayambe in Ecuador, and the Grand Tetons in Wyoming.

He made a goal to climb the “Seven Summits.” He currently has two knotched, with five to traverse. He also continues his love for triathlons and to date has competed in 25 Ironman competitions.

In 2010 he chose to celebrate the 30-year anniversary of losing his leg by competing in eight triathlons in eight months. He also became the first physically challenged athlete to finish the Norseman Xtreme Triathlon, the most difficult of all triathlons in the world. He has run the Boston Marathon twice and has over 12 additional marathons to his credit.

Glasbrenner is a public motivational speaker and wrote a book in 2012, titled The Gift of a Day. The book accounts 12 specific days which he chose to view as gifts rather then defeats. He effortlessly displays how to turn dark days into personal revolutions and how they can deepen one’s character. He encourages his audiences and readers to surround themselves with good people who build you up and encourage your dreams.

“If your dreams don’t at least scare you a little, then they are not big enough,” one of Glassbrenner’s most treasured piece of advice for his followers.

Now that his Everest journey has come to a close, he is now back home in Golden, Colorado where he resides with his wife, Elizabeth, and two children. He ultimately enjoys staying at home with the kids when he is not training or out on a trip. He is looking forward to racing more, finishing his climbing goals and topping those five remaining summits, and who knows maybe even pick up a new sport. In the meantime, he embraces each day as it comes, knowing today tomorrow and the next are all gifts. 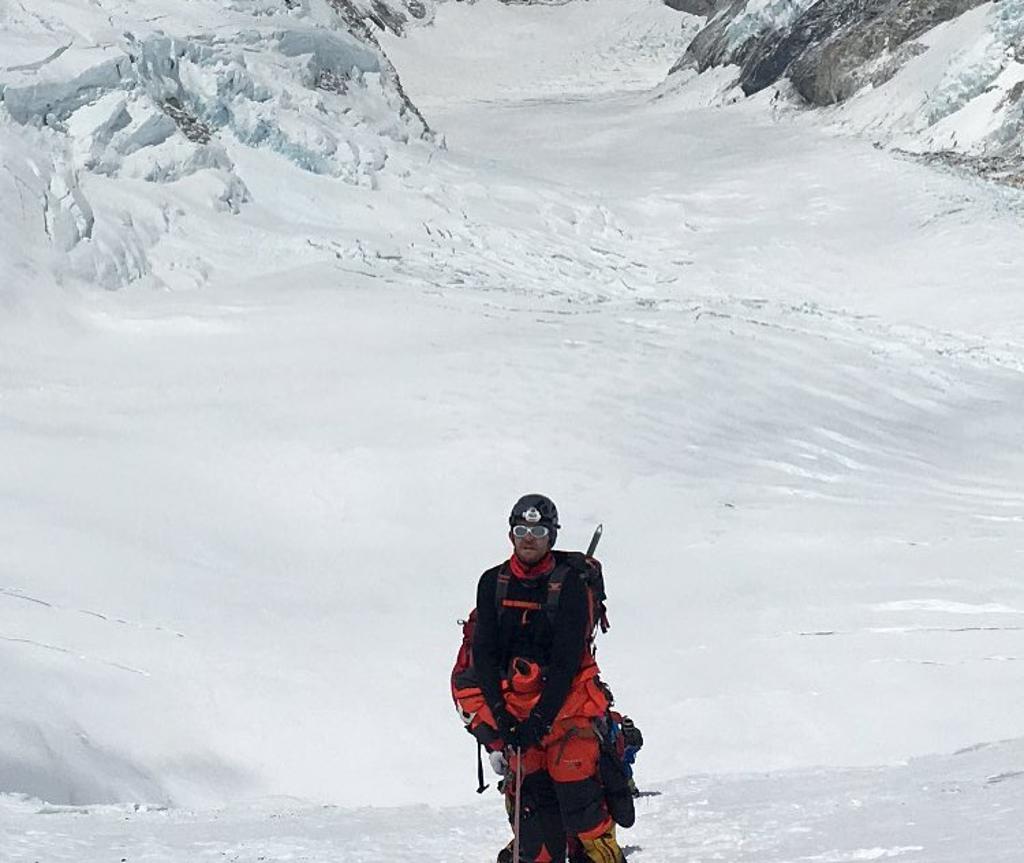