Lake Placid, New York – Team USA avenged its Thursday defeat against the 2012 Paralympic champion Germany at the U.S. Women’s Wheelchair Basketball International Friendly, winning Saturday morning by a convincing 22-point margin, 65-43. Both squads finished the three-day competition with 5-1 records. The United States started out with a quick lead and never looked back, and had a 14-6 lead after the first quarter, and then increased its lead to 16 at the half, 32-16.

A stingy U.S. defense shut down the inside game of the Germans, and controlled the rebound game, 43-25. Germany’s Gesche Schuemann and Marina Mohnen were held to only 17 and 12 points, respectively. The U.S. trio tabulated accounted for 17 of 19 points in the fourth quarter to seal the victory.

In the closing game of the day, Team USA cruised to a 69-32 victory over 2014 World champion Canada, having seven of 12 score throughout the 40-minute game. Once again, Murray (27 points) and Hollermann (20 points) scored 47 points in total. Team USA was 52 percent from the floor, while Canada finished 29 percent in shooting. Canada’s Arinn Young collected 13 points, and Cindy Oulett drained 10 points.

In the other games, Great Britain and Canada swapped the lead seven times over the course of the second and third quarters, and were tied after both stanzas, 28-28 after second, and 42-42 after the third. In the fourth, Helen Freeman and Amy Conroy put up a collective 14 points to defeat Canada, 70-50.

The evening game between Germany and Great Britain was a close affair, with Germany narrowly escaping for a 59-54 win. Germany held a six-point lead after the first, 14-8, and Great Britain was only able to tie or have a slight advantage in the remaining quarters. Germany’s Mohnen was the leading scorer with 23 points, with Marieke Miller reaching double digits with 10 points. Great Britain saw four athletes reach double digits in scoring: Freeman (17 points); Jordanna Bartlett (12 points); Clare Griffiths (10 points); and Amy Conroy (10 points).

Up next for Team USA will be a trip to Frankfurt, Germany, for the 2016 Women’s World Super Cup, July 13-18. Team USA will have one more training camp at the Colorado Springs Olympic Training Center, August 8-12, before traveling to Rio de Janeiro for the 2016 Paralympic Games.

The U.S. Women’s Head Coach is Stephanie Wheeler of Champaign, Illinois, who won two Paralympic Games in 2004 and 2008, and will be assisted by NWBA Hall of Famer Trooper Johnson of San Lorenzo, California, and Amy Spangler of Madison, Wisconsin, with Kearstin Gehlhausen of Whitewater, Wisconsin, serving as the team leader, and Karla Wessels of Lexington, Kentucky, is the athletic trainer. 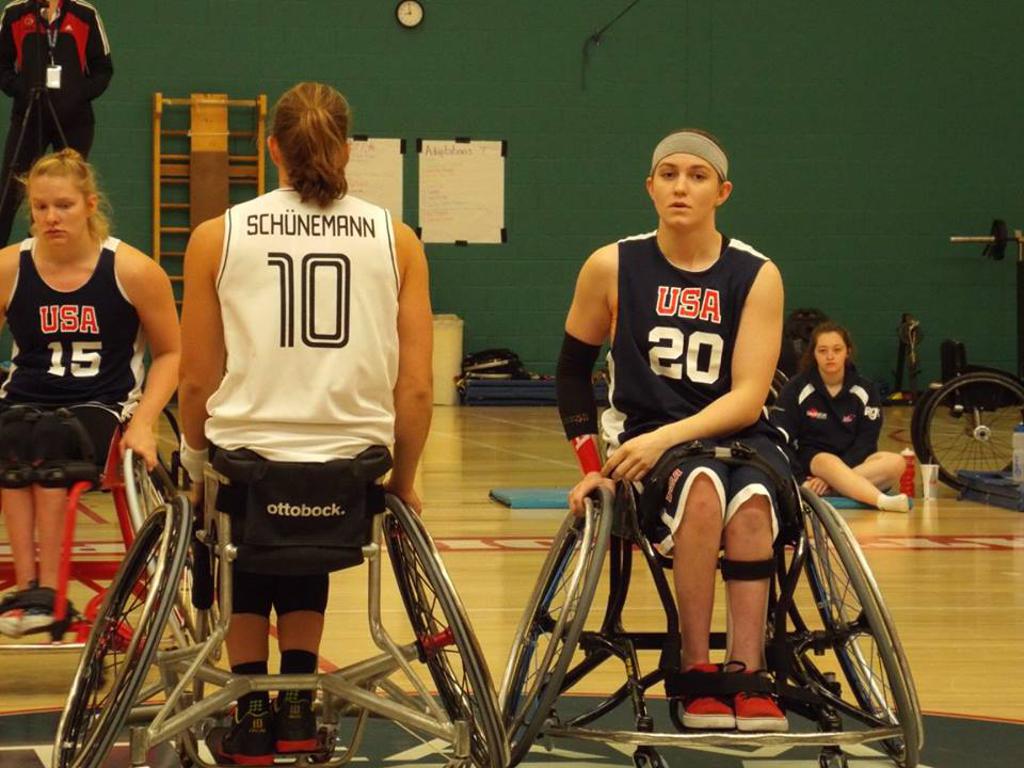