RIO DE JANEIRO, BRAZIL – For the second consecutive day of the Rio Paralympics, Team USA comes out popping like a Brazilian’s popcorn vendor kettle with four athletes scoring double points to defeat Germany, 77-52. The United States improved to 2-0 in pool play at the Rio Olympic Arena. The U.S. will play the Islamic Republic of Iran on Saturday at 2:45 p.m., in the Carioca 1 Arena.

The United States started with a back and forth first quarter. With 33 seconds remaining, Jake Williams of Milwaukee, Wisconsin, scored on a fast break to give the United States a 13-11 lead over Germany, and never looked back again. This scoring opportunity was created by a steal from Co-captain and three-time U.S. Paralympian Steve Serio of Westbury, New York. Team USA closed out the first with a 15-11 advantage. Williams finished the game with 12 points.

The second and third quarters witnessed a U.S. 45-25 cumulative run (24-15 in the second and 21-10 in the third). Team USA rallied on a pair of Serio three-pointers, along with four-time U.S. Paralympian Matt Scott of Detroit, Michigan, putting back 10 of his team leading 15 points. Team USA led Germany, 39-26 after two quarters.

“Most important for us was to play 40 minutes. If we can do that we can score a lot of points and the high scorer can be anyone on this team,” said Scott. “We just have to open strong and finish strong, and that is what we did here today. We have versatility and lots of options on this team. We are deep, and willing to go to the bench and anyone can step up and make it happen. Today just speaks to the volume and depth of the team.”

The third stanza witnessed a U.S. swarming defense and efficient offense spurned by a slew of U.S. players finding the bottom of the net. The United States maintained its advantage in the fourth for a 25-point victory.

Brian Bell of Birmingham, Alabama, and playing in his first Paralympics scored 13 points, which is his second consecutive day of scoring double digits. Josh Turek of Council Bluffs, Iowa, and a three-time Paralympian, contributed 12 points.

Serio finished the day with nine points, all from beyond the arc, and was the team’s defensive leader grabbing six rebounds and dishing out six assists.

Overall, the United States outrebounded Germany, 35-28, forced 17 turnovers and finished the game with 10 steals. For Germany, the leading scorers were Thomas Bohme with 26 points, and Dirk Passiwan with 8 points.

“When we pieced this together, I wanted to make sure we had good general skills and we have a team here that can do it all,” said U.S. Men’s Head Coach Ron Lykins of Columbia, Missouri. “Aaron Gouge gets two fouls early, and we had to pull him and Mike Paye to protect Aaron. It was important to keep Brian Bell in as he was scoring early. Our practices are very competitive and when these guys get their names called, they are all ready to go at anytime. We did a great job in shutting down their top guys today, however Bohme showed to be a great player for them, as he scored 14 points in the first half.”

Up next in Pool B play for Team USA will be the Islamic Republic of Iran on Saturday at 2:45 p.m. Eastern.

The U.S. Men’s Team opened the Rio Games by defeating host country Brazil, 75-38. The U.S. men’s team qualified for the Rio 2016 Paralympic Games by winning the 2015 Parapan Am Games in Toronto, Canada. The U.S. men outscored the competition by 36 points per game. 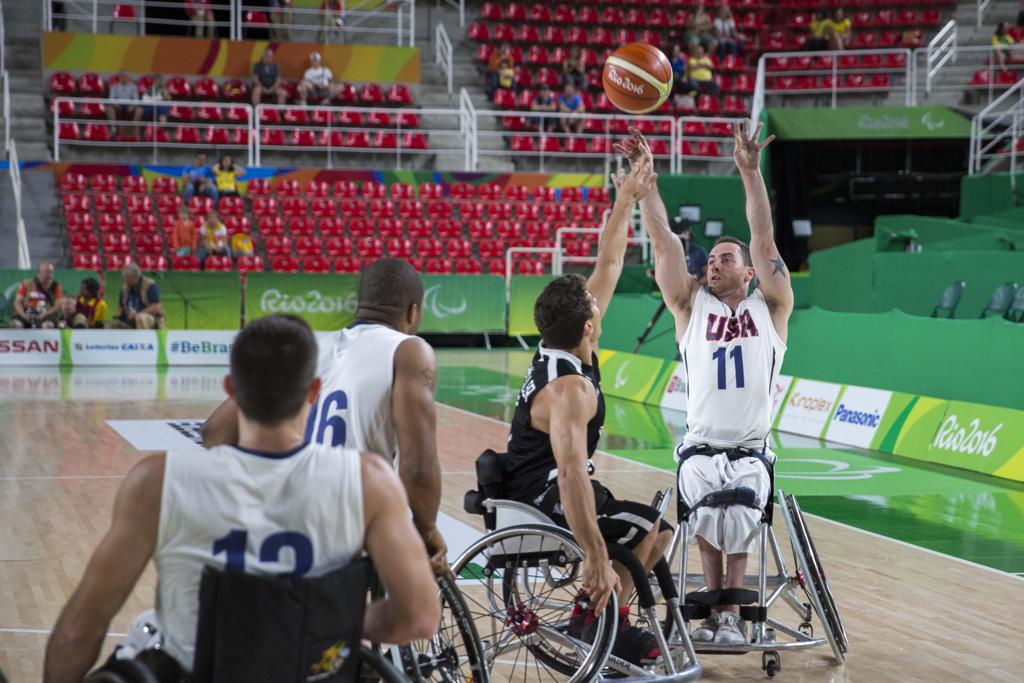